For the past three weeks, my students and I have heard accents and languages from all over the world. We’ve also felt fortunate when multilingual service industry employees help us when our own stammering, unconjugated attempt at Italian fails us. We haven’t received any mistreatment or disrespect from the people whose country we’ve chosen as a temporary home.

Until the past week.

We went to a prominent museum on Friday as our host-sponsored cultural activity, and art historian Dr. Elizabeth Butler met us at the museum to serve as our most knowledgeable guide. I’d taken my students here the previous week, but I knew Elizabeth would give the students a much better perspective.

Inside the museum, we successfully passed through security and proceeded to a very busy cloak room where we were required to store our backpacks. We’d been through this routine before, and the super-efficient desk clerks took each bag, handed over a claim tag, then shooed us out of the way of other patrons.

On Friday’s visit, one of my students hefted her backpack onto the desk, and when the clerk took it, he exclaimed to her, “Heavy!” He didn’t ask any questions and handed it off to another clerk, who put it on the shelf in the storage room. When another of my students placed her bag on the counter, she expected to walk away, too. That’s when the clerk called out to her: “Miss! Miss!” When she turned toward him, he said he’d need to search her bag. Instead of asking her to open the bag, he unzipped it, then told her to remove her laptop. He rifled through the rest of the bag, handed her the claim tag, and stowed it. He searched the bag of no one else in the full room and also hadn’t during our previous visit (and on both occasions there were plenty of bags large enough to hold a laptop). Why am I even calling attention to this seeming randomness? My student was the only person of color to be seen in the packed area.

When she emerged from the cloak room crowd, she was visibly shaken. I asked what had happened, and she told me. From that point on, even as we walked through beautiful hallways and rooms filled with the world’s greatest art–the very pieces that had awed all of us only a week before, there were some conspicuous absences: my student’s usually ebullient personality, her inquisitive participation, and her gloriously playful selfie-snapping in front of masterpieces. Her joy and curiosity were obviously jaded. She stayed at the back of the group, eyes downcast. 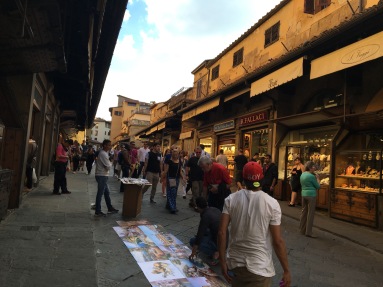 I am not naive enough to believe racism doesn’t exist elsewhere in the world or to think racial profiling happens only in the States. But I’m still disillusioned that my student had to experience this cruelty and disrespect during a trip that has given her a global perspective, a view of a country that embraces internationalism. We came here well aware of Italy’s history of sexism; racism, not so much.

In Kentucky, racism is pervasive and omnipresent. Microaggressions abound–the clerks who follow customers of color closely through stores, boastful comments from people who “don’t see race,” compliments for “sounding white,” the request to represent the perception of all black people. Kentucky isn’t an isolated case because microaggressions breed invisibly, perniciously: social media memes shared regarding a kid’s responsibility for her own death, the blame placed on the President for everything from war to a pothole on a neighborhood street, the continued (and ramped up) existence of “sundown towns.” Silence about these microaggressions becomes complicity, and when they build up, they erupt in macroaggressions–e.g., murders of unarmed people for “looking scary,” potential walls at borders.

Racism in Italy, the birthplace of the Renaissance, seems so counterintuitive since people from every part of the world live, work, study, and vacation in the country. Yet, open hostility is directly shown toward political figures and athletes of color, such as audience members throwing bananas at them. Perhaps it’s a result of increased immigration in addition to a protective attitude toward the tourist-overrun homeland. But these phenomena seem more like correlations than causes.

I am well aware that such a display is often an act of insecurity about a perceived loss of power in the person showing racist behavior, and a woman of color is a double target because of her intersectional race and gender. The cultural climate of the country my students have come to adore in less than a month was not really any better than home on that day. To paraphrase Countee Cullen, of all the things that happened here, I hope this experience isn’t all that she remembers of our study abroad month.

What to do now? I’m writing this public blog. I have told our hosts, who were just as surprised as we were. The incident is likely the act of one racist and ignorant person who works at the museum, but since we don’t have a document or some other kind of hard proof, it would be nearly impossible to bring any kind of charges or even to alert the museum of its employee’s behavior. Fortunately, our hosts will keep this incident on file and in case something like it happens again to one of the thousands of college students who study in Italy annually, they will be better equipped to bring some kind of charges or call attention to the pattern.

What I would like to do is stick right beside my student and step in at the mere inkling of maltreatment not only for the duration of the summer term but for the rest of her college career and her life. However, she doesn’t need a white savior, and I won’t play that role. What I must do is keep working toward social justice wherever I go. At EKU. Throughout Kentucky. In the United States. My activism doesn’t end at the Kentucky state line or the U.S. boundary. I must continue to collaborate and work alongside my colleagues and students who are also social justice warriors and who experience these issues directly. 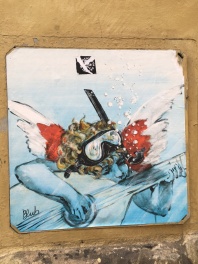 If there’s a lesson here, it’s that racism happens everywhere, and it’s a shock when it happens somewhere that is otherwise all about diversity and multiethnicity. For the most part, Italy has been welcoming, accepting, and helpful to a bunch of first-time American visitors. I can only hope that it’s Italy setting the trend toward globalism rather than Italy becoming more like the countries that despise the Other.

One thought on “Incident in Old Italy”