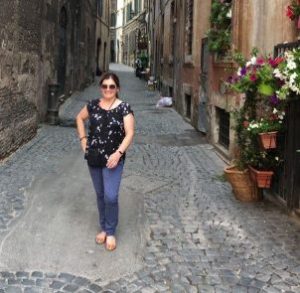 I’m having the time of my life in Italy, and apparently, my face is showing it. Facebook friends have commented on my joy, and the AEF faculty and staff are getting used to hearing me say, “Benissimo!” when they ask a simple “How are you?” The exquisite food, the beauty from all angles, dogs EVERYWHERE!, the history at every corner—all of it piques my enthusiasm on a daily basis. 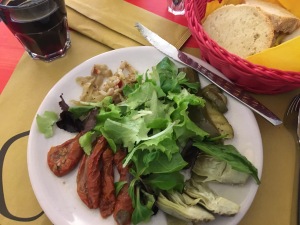 On a deeper level of my joy, I’ve been tearful and thoughtful when I’ve stood near great art. Marble sculptures from 500 or more years ago, who forever shape the landscape of Florence, make me want to know the people who chiseled the stone and who inspired the images. In their effort to praise the human body, these artists provide exemplary models for the viewers to emulate: the casual look and stance combined with a taut, muscled body give David eternal bragging rights to masculinity, and the various women subjects present graceful, round shapes that say, “Eat an extra gelato.” Yet, these same women are often nameless or have seemingly interchangeable faces, hands, and feet with their male counterparts.

What’s nearly disturbing—and what inspired me to teach in Italy this summer—is the combined beauty and violence depicted in many Florentine art works. It’s the Romantic definition of the sublime, this combination of opposites, and it’s quite unsettling to witness firsthand. The more subtle example is The David himself: a young man, a kid really, stares somewhat lackadaisically into the distance; however, according to the biblical narrative that accompanies the piece, this kid is preparing for violence agains 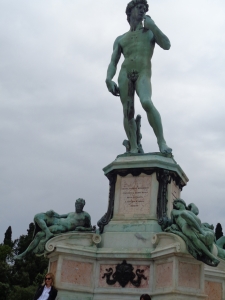 t an enemy who seems much bigger than he is. He’s murderous in this casual pose. What’s even more striking is the scientific consideration that Goliath most likely had late-stage acromegaly, suggesting Goliath was an easy target and switching the roles of the underdog in this prototypical little guy/big guy story.

I’m interested in the more overtly contradictory pieces, such as the range of awe-inspiring beauties of the Loggia dei Lanzi perpendicular to the replica of David that stands in front of the Palazzo Vecchio. From The Rape of the Sabine Women by Giambologna in 1582 and the corresponding Rape of Polyxena by Pio Fedi in 1866 to Perseus’s murder of Medusa in Cellini’s 1545 work to Hercules’ fatal attack on Nessus the centaur, Giambologna’s later work from 1599. All of these pieces effectively communicate to viewers from all centuries: conquer what you want and destroy what is different; depict it beautifully, and time will be on your side. Indeed, these pieces are symmetrical and multi-dimensional in their contortions, and the vascularity of the statues’ physical form is a detail to be savored. But why must war inspire such art? Is it to bring beauty to ugliness? Is it to make us think more critically about the stories we tell? 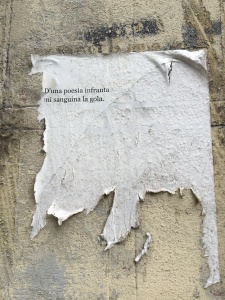 This rhetorical question raises another observation from my days in Italy: the city’s love affair with the American 1970s. From personal experiences–the Saturday Night Fever soundtrack I hear from the courtyard below my deck to a Stevie Wonder song on the playlist in a café to a Led Zeppelin revival-opera, this city loves America’s grooviest decade. That’s only the surface. What happened in that decade was also growing cynicism about the never-ending war, burly masculinity, rebelling femininity, and the grim embrace of change—e.g., the environmental crisis, the divorce rate, unveiled corruption of politicians. It seems to me that Italy is about complexity, liminality, and confrontations of mindlessness (they laugh at the polarity of American political choices). I don’t know enough about Italy in the current era, but based on what I know about the long Italian Renaissance and on what I’ve seen in the past 10 days, these folks appreciate art and beauty and don’t have time to let dirty politicians and ugliness slide by. They seem to see the expansive gray area between the rest of the world’s penchant for binary opposition. They live and walk on bumpy cobblestone that offers a variety of gray in every step.

The Italian internet is somewhat like the American phone system of the 1970s and 1980s, too: long waits for connection remind me of waiting our turn for the neighbors to hang up on our “party line,” the connection requires physical equipment like those endlessly long and tangled cords, and phone bills rack up by the minute, like my wireless plan, and discourage use from my studio even when the internet isn’t down. All of this is to explain why I haven’t submitted a recent blog. 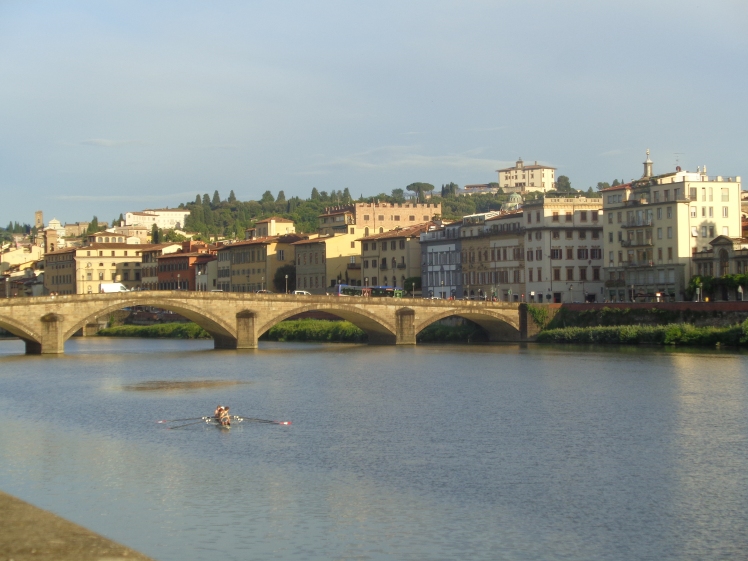 One thought on “How Deep Is Your Love…for Italy”